About the Heart Team

Our mission is to honor Wes’s life using a team approach, combining the efforts of his loved ones and other existing foundations in the pursuit of a common goal. The Wes Leonard Heart Team is committed to honoring the children who have lost their lives to Sudden Cardiac Arrest and preventing other families and friends from feeling the pain of losing their loved ones. With this team approach we feel we can give others a chance at “just one more game”.

Wesley James Leonard was born August 30, 1994, to Gary and Jocelyn in Baldwin, Kansas. Wes lived in Baldwin for the first 10 years of his life. His brother Mitchell was born July 7,1997. They lived the typical “Norman Rockwell” small country town life. They lived on the edge of town with several acres and a small pond. The pond was the center stage for many activities for the Leonard’s. They would fish, swim, catch turtles and snakes, and do anything else typical country boys could dream up. Gary and Jocelyn entertained countless family and friends year round at their home. Their 4th of July parties were nothing short of epic, sometimes drawing 150 to 200 people.

Wes and Mitchell are what every parent dreams their kids will grow up to be like. They both inherited the best traits form Gary and Jocelyn. Gary and Jocelyn were both standout high school athletes; Gary in football and Jocelyn in basketball. Jocelyn has a personality that everyone loves to be around. She is kind to everyone, funny and loves to be the center of attention. Gary is a perfectionist, hard worker and very talented craftsman. I think these traits, combined, have made for some extraordinary children. 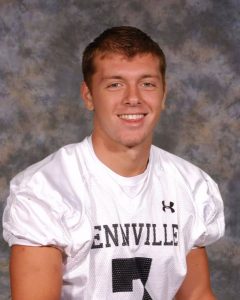 Wes had a personality from a very early age that people were just drawn to. He was funny and kind to everyone. He quickly became the most popular kid in school. He was always a head taller than everyone and the best athlete on any team on which he played. He excelled at football, basketball and baseball in Baldwin. It was easy for everyone to see, even at an early age, that he was a very gifted athlete. At the age of 8, Wes won a home run derby at the coach pitch level. He had 9 home runs, some of which were struck to the parking lot. Wes’ coach, a family friend of the Leonard’s, was pitching to Wes when he hit a line drive right back to him and knocked him down and broke his ribs.

Wes and the Leonard family left a positive impact on the Baldwin area that remains today. It is estimated that over 150 friends and family made the 700+ mile drive from Kansas to Michigan to attend the funeral services. The Baldwin community, and school district, had a week-long Sudden Cardiac Arrest awareness and memorial for Wesley.

Gary and Jocelyn raised Wes to be a good, strong and dependable man. Since Wes was so much bigger than everyone his age, people treated him more like an adult than a kid of his actual age. Some people called him a man-child. He may have presented himself as someone much older than he actually was, but once you really got to know him you would see he was still ALL boy. 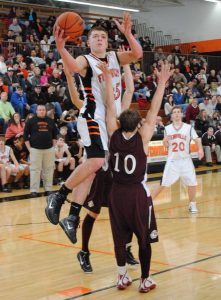 The Leonard’s moved to the Fennville area when Gary took a job in Holland, Michigan. Jocelyn found a home teaching music in the Fennville school district. They chose Fennville because it reminded them of Baldwin. It was a small town, with a close community and wonderful people. Once again, Wes found it easy to make friends and quickly became the most popular kid in school. Younger kids looked up to him and the older kids made quick notice that he was going to be a local star. The JV and freshman coaches knew that there was a good chance they would never coach him because he would be a varsity player in his first year. If records are correct, Wes is the youngest starting varsity football player in Michigan history. His first 2 varsity football games he was only 13 years old and playing wide receiver against 17 and 18 year old kids.

Wes was a 3 year starter in both sports and was the starting quarterback his sophomore and junior year. Wes was knocked out of the 3rd game of his junior year with a separated shoulder. It was not his throwing shoulder so of course he played 3 quarters with the separation before pulling himself out. He would take the snap from center and hold the ball with just his throwing arm. He missed 2 games and came back to win out the rest of the games to make the playoffs. In 2010, Fennville finished the conference season 5-0 and 7-4 on the season with Wes throwing over 30 touchdowns and over 2000 yards. He had games of 5, 6 and even 7 touchdown passes. One game he almost had 500 yards passing. He was the leader of the defense at linebacker and sometimes played safety. He could play any position the team needed. His basketball statistics were just as impressive. He averaged around 20 points per game for 2 seasons. In 2010, Fennville would win most of their games by over 30 points so Wes would only play 2 – 3 quarters at point guard. His statistics could have even been more impressive but he would be on the bench shortly after half-time. 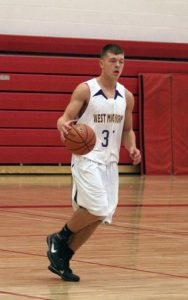 Wes was a member of the West Michigan Lakers AAU basketball team. They have been, and are one of, the best AAU teams in not just Michigan but the entire country. They have many tournament wins and a couple years ago they had a National Championship runner-up team. Wes played with some of these players for several years and these young men have developed life-long friendships. Coaches and Players alike in the AAU circle have been impacted by Wes. The Lakers honored Wes with a tournament dedicated in his honor.

Wes was good, very good, and maybe even great at just about every sport he did. Coach Klingler loved coaching Wes because he would play any position he asked him to and he never questioned his decisions. He was not a selfish player, he was not a self promoting or a flashy player, he was just one of the best players in the state. He let his quality of play do the talking for him. A friend of the family said that Wes had every right to be cocky, arrogant and even self-centered, but he was none of that. That is why he had so much respect from his teammates, coaches, referees and opposing coaches and players. Players from other teams mentioned how much they enjoyed playing against him because they would play at a higher level and just liked being around his type of energy. He embodied the true spirit of sportsmanship. He was a true leader. 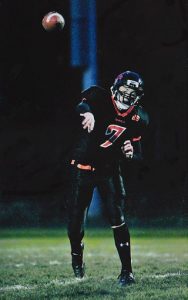 Many people had the opportunity to witness his teams in football and basketball over the years develop around his type of clean and passionate play. That was evident his junior year when the basketball team had a 20-0 record, yet all of the players took it one game at a time and never let it get to their heads that they may be the best team in the state of Michigan. His leadership was even more evident when watching how the young men of Fennville played days after his passing. They played with love, pride and class in the playoffs during the most difficult times they had faced in their young lives. They too embodied the true spirit of sportsmanship.

Wes had a tremendous amount of mutual respect for other players and coaches in the conference. Many of the players from other teams became friends of Wes’ off the field and they have all been significantly impacted by his passing. Hundreds of athletes from the conference, and even teams Wes did not play against, were in attendance at his visitation and funeral. This was a showing of true respect, love, honor and sportsmanship. These are traits that these young men and women will keep with them for the rest of their lives.

A friend of the family in Fennville said that the kids of Fennville didn’t look up to the Kobe Bryants or the Lebrons of the world, they wanted to be like Wes. He was truly the local hero who everyone loved and was destined for greatness. It was said that he did not accept any type of bullying around him and always looked out for the little guys in school. Many people considered Wes to be their “best friend”.

Wes had a positive impact on more people in his short 16 years than most people have in a lifetime. He lived what most consider a perfect 16 years with little or no regrets. This may be why he had such a profound influence on those who knew him and even now continues to impact others.

Request a Call Back

We need to do what we
can to save a life.

Our mission is to honor Wes’s life using a team approach, combining the efforts of his loved ones and other existing foundations in the pursuit of a common goal. The Wes Leonard Heart Team is committed to honoring the children who have lost their lives to Sudden Cardiac Arrest and preventing other families and friends from feeling the pain of losing their loved ones. With this team approach we feel we can give others a chance at “just one more game”.

To have a designated, qualified individual responsible for the AED on site during all planned events. This is a reasonable goal and one that is guaranteed to save lives.

Need an AED and want to know how to get one?